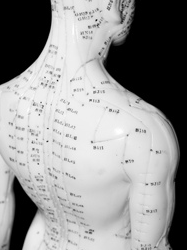 I have studied and lived in China, and I can assure you that the Chinese do indeed suffer from back pain, just like Americans. Perhaps even more so, since their way of life often involves more physical exertion than we are used to. They have, however, evolved a very effective method for treating back ache, and that is acupuncture.

Acupuncture is a complete and natural system of medicine based on principles that have been used in the Orient for the last four thousand years. It is becoming increasingly popular in the United States and Europe because it gets results, often when other medical interventions have not worked.

According to acupuncture theory, there is a life-force, called “qi” in the Chinese language, which flows through a network of channels, or meridians. Along these meridians lie hundreds of points where the qi can be manipulated directly through acupuncture techniques. The manipulation of the life energy produces beneficial changes in the mind and body.

In the case of back pain, there is often a stagnation of qi in the painful area. The main meridian traversing the back starts on the face, near the bridge of the nose, and flows up and across the head, down along the spine, and down the back of the legs, ending on the outer edge of the little toe. We generally treat points on this meridian that lie within the painful area, but in many cases, results are improved a great deal if we use points on the legs as well. How points on the leg can alleviate pain in the back is one of the mysteries of acupuncture that cannot be explained by Western science. It can only be understood by studying the acupuncture meridian system.

In cases of chronic back pain, there is often a deficiency of qi, specifically in the Kidney meridian. In such cases, the pain will be dull but fairly constant, and there may be systemic symptoms as well, such as fatigue, pain or soreness in the knees, ringing in the ears, frequent urination, declining memory, and diminished sexual energy. Such symptoms commonly accompany aging, but they are also found among younger people. With proper acupuncture and herbal therapy, many of them will improve while the back pain is being treated. This is because acupuncture is a holistic system of medicine. The whole person is treated, not just the person’s back. When the qi is balanced through acupuncture therapy, the body’s vitality is restored and the body begins to heal itself.

Our understanding of acupuncture from a Western scientific point of view is incomplete. We know it stimulates the production of endorphins, the body’s natural pain killers. It also seems to block the transmission of pain signals to the brain. It increases circulation in the problem area and promotes tissue regeneration. By relaxing soft tissues around the spine, it allows misplaced vertebrae to gently shift back into alignment. It also effectively deactivates trigger points, which are overly sensitive spots in muscles or fascial tissue that sometimes “trigger” pain or other symptoms into an area in a different part of the body, either close or far away. Such explanations are useful, but they do not account for the fact that a person’s overall health can be improved with acupuncture. They also do not explain how acupuncture can treat other disorders which do not necessarily involve pain, such as hypertension, PMS, digestive problems, stress disorders, chronic fatigue, etc. Perhaps we will never completely understand acupuncture through the eyes of western medicine because acupuncture is based on a different set of assumptions about how the mind and body work, one that is “energetic” rather than materialistic. And even though this energetic understanding of the body has not kept the Chinese from getting back pain, it has certainly given them an effective method for getting rid of it. As many Americans are finding out.