“Fractality” and microsystems used in Acupuncture 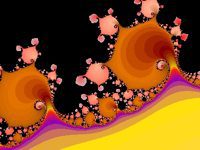 You have probably heard of fractals—geometric forms that defy our usual definition of shape and size—as a fractal shape possesses infinite detail which repeats itself at every size or scale of
magnitude. The human body possesses fractality in its physical structure, movement, stages of development, and in the system of points used in acupuncture.

In mathematics and information science, the property of fractality inherent in living forms is referred to as
“self-similarity”. Just as the twigs of a tree are similar to the tree’s branches, microsystems of acupuncture points mirror the whole system of acupoints found in the body.

In a microsystem, the whole body is reflected in just one of its organs, such as the ear or the hand. Conditions of the body, wherever they might be, from head to toe, can be treated by using points in one microsystem.

Nature likes to re-use its finest designs over and over, something called “redundancy” in information science. In terms of acupuncture, redundancy shows the resiliency of the system of acupuncture meridians, and it demonstrates that there are many ways to access the body’s “qi channels”.

There are several known microsystems used in acupuncture. Let’s look at some of them:

Using the microsystem of auricular acupuncture, you can treat the whole body merely by treating points on the external ear, or auricle. In other words, the whole body is projected onto the auricle. Another way of putting it is that the ear “mirrors” the whole body, or reflects an image of it.

The ear is not the only acupuncture microsystem. In the 20th century, a Korean acupuncturist named Tae Woo Yoo discovered that the hand is also a microsystem. It is interesting to see on hand acupuncture charts that the twelve acupuncture meridians of the body are mapped out on the hand as well, in miniature form. As with the ear, by treating the hand alone, the whole body can be treated. 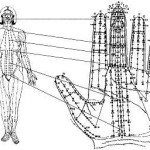 Another microsystem commonly used in acupressure, rather than acupuncture, is the foot. We see in charts of foot reflexology that the whole body is projected onto the foot, and practitioners of foot reflexology treat a client by massaging primarily the feet, and secondarily the hands and ears. The foot is not a popular microsystem for use in acupuncture because it hurts to needle points on the sole of the foot, unlike points on the hands and ears. 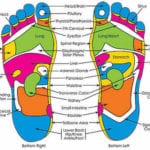 Points on the scalp are also commonly used to treat the whole body. Scalp acupuncture is very effective for stroke victims. 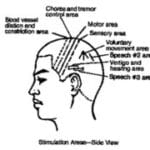 There are other microsystems (besides the ones mentioned in this article) which are less commonly used. In one prominent acupuncture text, one can find a picture of the face with points around the nose that treat other parts of the body. There is even mention of a study done in China where the second metacarpal bone of the hand was palpated along its length for tender points. When these points were needled, pain in other parts of the body was relieved.

The microsystems mentioned so far in this article can be used for both diagnosis and treatment. However, there are three other microsystems that are used only for diagnosis. 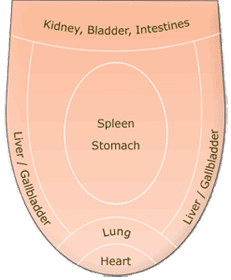 2) The pulse of the radial artery:

3) The abdomen, called the “hara” in Japanese. (Note: In shiatsu massage, the hara is treated directly while in acupuncture it is primarily a diagnostic area.) 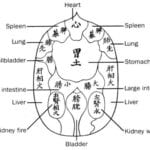 Outside the arena of Chinese medicine is a system called iridology, in which the iris of the eye is a diagnostic microsystem: 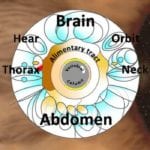 Probably, there are other microsystems waiting to be discovered.

The Holographic Body and Western Medicine

Although Western science observes fractals in the human body, such as the branches of the pulmonary system in the lungs, or morphological change inside diseased cells and tissues, there is very little application of the concept in Western medical practice. The Chinese systematical view of the whole body has no parallel in Western medicine.

In order to apply the idea of microsystems to the whole body, one has to go beyond the conventional view of the body as described in the study of anatomy and physiology, and examine a different view or paradigm—that of the holographic body.

Chinese medicine sees the body as a hologram. A hologram is a photographic record that contains information to reproduce a three-dimensional image when a laser is shined through it. A conventional photograph contains much less information because it captures images in only two dimensions. If we tear a conventional photo in half, then we lose half of the information. If we tear one of these halves in half again, we have only one-quarter of a picture.

A hologram is much different. If we break in half the photographic plate an image is stored on and then shine a laser through it, we still get a three-dimensional projection of the complete image. We can then repeat this process (remember the notion of “redundancy”?) and we still get the complete image. No matter how many times the plate is broken, or how many pieces or fractions (or fractals) it ends being, the whole image is preserved because all the information needed to reproduce it in its entirety is stored in each and every part of a hologram.

Chinese medicine recognizes that the human body functions like a hologram because every microsystem found in different parts of the body contains the information needed to treat the whole body. In fact, studies like the one involving the second metacarpal suggest that this information is stored in each and every part of the body.